Have you heard? Awkward team-building exercises are out. Forget building bridges out of paddle pops – and ditch the trust falls. When it comes to building team trust and collaboration, it can be as simple as hanging out and sharing a cold beer.

Nobody understands this as well as the team at Rocket, a bustling digital marketing agency based in Surry Hills. The team is required to run like a well-oiled machine to coordinate large digital media campaigns. The work can be challenging and complex, but the agency’s co-founders put a lot of their success down to socialisation and the collaborative benefits this can bring. Rocket’s social events include everything from playing soccer in giant inflatable bubbles (exactly as fun as it sounds), to Italian cooking classes, to amazing race and escape room experiences. Naturally, there’s a big party for Christmas. And throughout the year, Friday afternoon drinks have taken on a whole new flavour thanks to regular keg delivery from Malt Shovel. It seems hoppier Fridays are happier Fridays.

Co-founder and Chief Marketing Officer James Lawrence says, “Sociability is massive in an environment like Rocket where we need to problem solve as a team to maximise results for our clients. We take in-work steps like lunch & learns, weekly staff meetings, team meetings and one-on-ones to encourage interaction. Then from an out of work setting, we do things like Friday drinks, team lunches, quarterly team-building activities and volunteering to get staff to socialise with other staff in a non-work setting.”

The idea is that co-workers who socialise together, perform better. More genuine relationships lead to a happier workplace environment, clearer communication, and a culture of collaboration.

Of course, it helps to have co-workers you like to hang out with. Rocket Agency has a ‘No Jerks’ policy, meaning they aim to only recruit people who want the best for themselves and for others. As James says, “No-one wants to socialise with a jerk!”

Co-founder and Managing Director David Lawrence further explores the value of these social events. “Workplace culture is critical for us at Rocket. All work and no play would make us a very dull bunch. Socialising gives people a chance to really get to know each other in a more relaxed setting.”

It doesn’t just help in the easy times, either. “Socialising also helps build trust and comradery so that if things do get tough, people have strong relationships to draw on. And simply, because life should be fun! We spend a lot of time at work, so it’s critical people have a smile on their faces.”

It certainly helps if those Friday afternoon drinks are cold, delicious, and consistently available. James says that engaging Malt Shovel to be Rocket’s in-house drinks supplier has been a game-changer.

“We went from Friday drinks being pretty ad-hoc (sometimes with lukewarm beer) to basically being able to offer staff a food and beverage offering that rivals going to a bar. We have tap-beer, a range of premium beverages and basically the staff want to stay around and socialise with each other!”

Malt Shovel has provided Rocket with their very own Blade unit – a tidy countertop beer tap system that allows employees to pour their own beer with all the theatre of their own in-agency bar. Small kegs allow the team to try limited edition and early release brews: “The Panhead ales from New Zealand and the Brooklyn Bel Air Sour beer have been firm favourites, and we love that we can get a fresh keg delivered the next day if we’re holding a special event at short notice.” 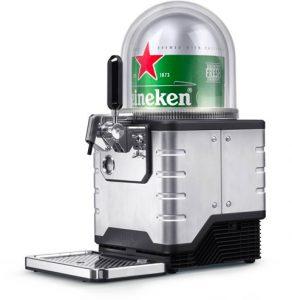 As is fitting for their creative environment, Rocket employees have been eager to consult with Malt Shovel’s beer experts for more unusual and novel beer recommendations as well as the crowd-pleasers – adding an overall sense of fun and a talking point in the agency.

If you’re curious about the benefits of having a beer tap and fresh beer in your own workplace, Malt Shovel is the team to call. We can get you set up with tap beer equipment for the office and tasty beer delivery in handy 8L, 20L or 50L kegs. We’re widely known as the beer experts, but we also supply wines, Remedy kombucha and craft spirits including our favourite Four Pillars.